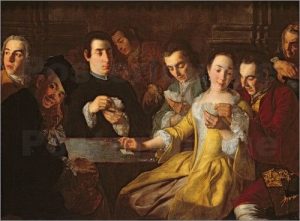 Giacomo Casanova had a taste for games of chance and often tried to make a living from gambling. Faro was his favorite. It was a card game much like modern Mini Baccarat. As a man, your chance in a game with Casanova would be equal, as he never cheated and often lost. As a lady, however, you would always win. He couldn’t bear to take your money. But how would he play “the poker of the stripping” in 2016?

In Conjuring Casanova ER doc and modern woman, Elizabeth Hillman learns how far the game can go when she leaves her friends with the great seducer and returns to find…a 21st century party going on. Imagine that?! Get the details, pre-order now!

As a little girl, Melissa Rea fell asleep whispering stories to herself in the dark.  In elementary school, she got in trouble for embellishing when the truth just … END_OF_DOCUMENT_TOKEN_TO_BE_REPLACED